Monday morning, I read a very sad story in the Wall Street Journal.

Buzz Aldrin’s children are asking a court to make them the former astronaut’s guardian; their father is fighting it https://t.co/nHoyHlKT7B

Aldrin, age 88, has lived an incredible life. He flew 66 combat missions in Korea as a young Second Lieutenant in the Air Force. He earned a Doctorate from MIT in astronautics. Most famously, Colonel Aldrin stepped on the moon just nine minutes after Neil Armstrong became the first human to set foot there.

And now, he’s in a situation many fear in their twilight years: he’s at war with his children over who is in charge of his life, his legacy, and his money.

I was fairly sympathetic to Col. Aldrin after reading the WSJ story, but really didn’t think much more about it until this morning, when I saw this piece from The Atlantic on the situation: 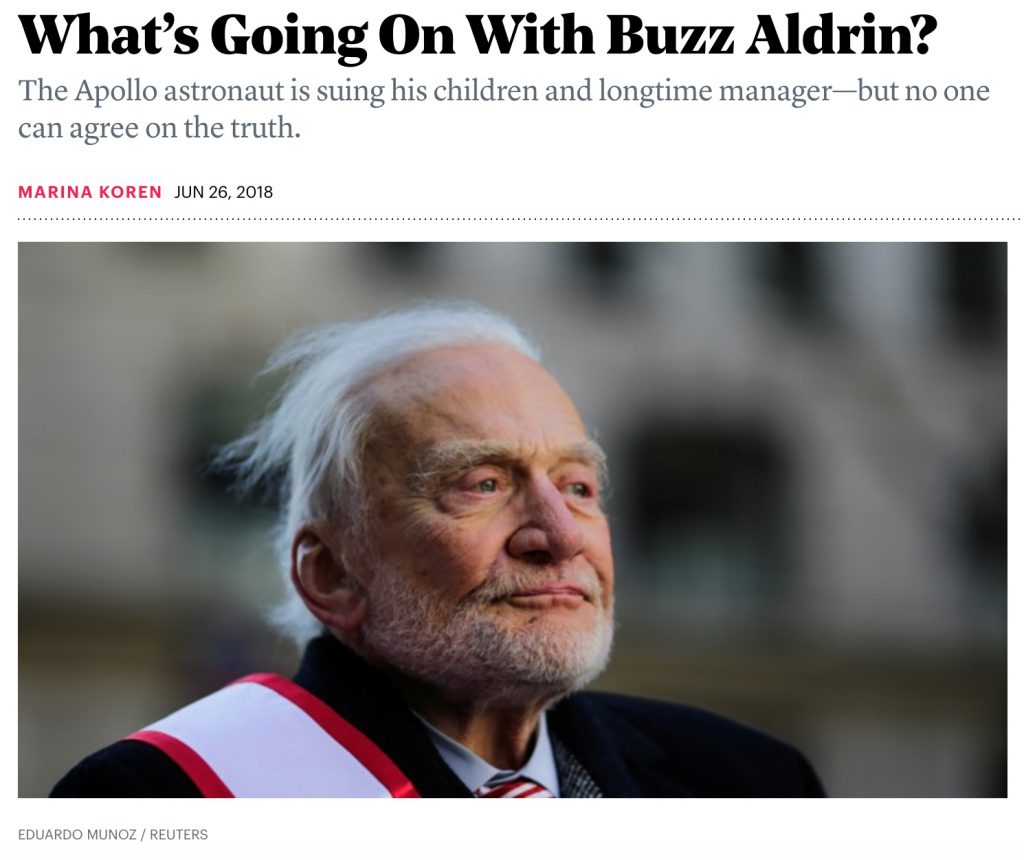 What jumped out at me – even before reading the article – is the photo selection. My first thought: “The Atlantic thinks Buzz Aldrin has lost his marbles.”

Photo selection, like headline writing, is more art than science, can be highly controversial, and is an incredibly important part of journalism. As journalists, we know that the photos we choose to include with a story help tell the story, giving it depth, and in this case, perhaps shading the overall tone and tenor of the story.

Contrast the photo used by The Atlantic and the one used by the Wall Street Journal, above. The Journal opted to use a photo that shows Col. Aldrin giving the camera a thumb’s up. He gives the camera a steady gaze, and looks as though he’s in complete control of his mental faculties. The Atlantic, on the other hand, chose a photo where a grizzled Aldrin looks fairly perturbed, is staring off into space, and his hair is disheveled, unkept even.

Which photo, regardless of the content of the story, supports Col. Aldrin’s position, that he is the victim of elder exploitation? Which one supports the position of his children and business associates, that he suffers from dementia and diminished cognitive ability?

Other media outlets fall somewhere between these two poles. CBS used a photo of Aldrin, with the same white whiskers but without a hair out of place, testifying before Congress – another subtle indicator that Aldrin is the victim, perhaps. Florida Today used photos and video clips of a clean-shaven Aldrin, again lending credibility to the octogenarian as the victim. The Associated Press went one better, using a photo of a clean-shaven Aldrin in NASA coveralls giving the thumbs-up sign. That man is clearly on the ball, the photo seems to say. 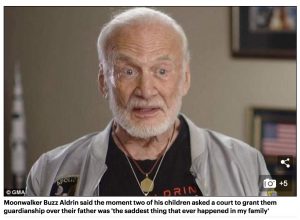 British publications, always a bit more tabloid-like than the mainstream U.S. press, went the same route as did The Atlantic: Buzz is a looney old man, their photos suggest. The Daily Mail used an image captured from a video, snapped at a moment when the grizzled version of Aldrin is wide-eyed and slack-jawed, his flight jacket rumpled and quite a contrast to the Buzz depicted in the AP story.

The BBC, like the Mail, opted for the “crazy old coot” version of Aldrin, showing the astronaut rocking the “Get your ass to Mars” shirt marketed by his foundation. Notice the scowl in the image… the combination of the off-color slogan on the shirt and the scowl give a much different window into Aldrin’s credibility as a victim than does a photo of him in a well-tailored suit, grinning from ear to ear. 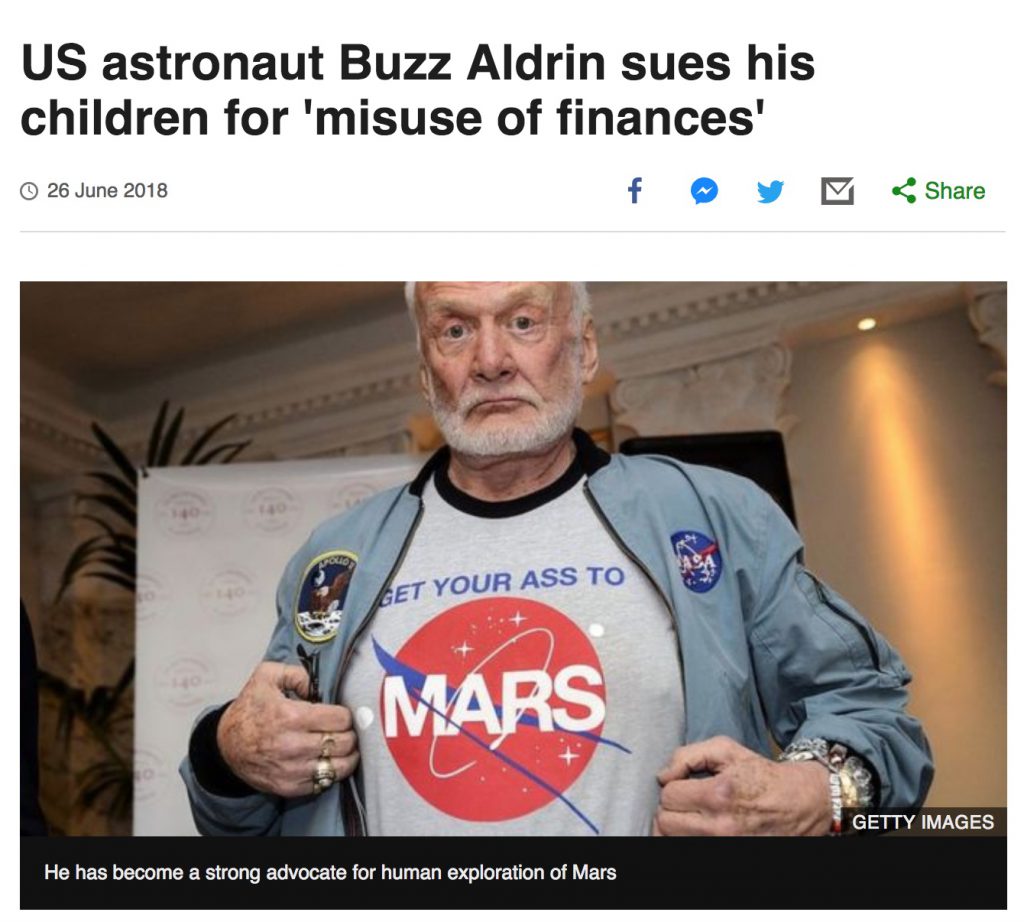 So who is right? Buzz, or his kids? Is he the victim of elder abuse and exploitation, taken advantage of by gold-digging business partners and greedy kids? Or is he as his kids say, a great man in a period of mental decline, in need of close care and supervision?

I have no clue, and neither do you.

But what is clear is that those of us in the press can choose to tell a much different story – even reporting the same facts – simply by the photos we choose to include with the story.