As a broadcaster and professional speaker, I’ve moderated quite a few panel discussions over the years. Last night I hosted an especially interesting one on behalf of the Animal Welfare & Behavior Club at The Ohio State University.

“Food for Thought” was billed as “an open discussion on food animal production,” and designed to expose members of the university community to different perspectives on animal agriculture. Panelists included a food animal veterinarian, an animal welfare and behavior scientist, a sustainability expert and a vegan activist. Panelists were asked to share their background and perspective on food animal production, and then addressed questions from the audience for nearly 90 minutes.

Of the roughly 75 folks in the audience, I’d estimate that as many as 20 of them were part of the vegan activist’s entourage. Everyone in the audience listened respectfully, and the panelists did a fantastic job of articulating their very different viewpoints on various issues.

The main crux of disagreement, regardless of the specific issue, is the role animals play in our lives. The vegan, in addition to believing it is ethically wrong to consume animals as part of our diets, believes that animals should not be treated as property in any way, and that their relationships with humans should be based entirely on what she described as “voluntary consent.”

In other words, it really didn’t matter if were discussing nutrition, animal care, environmental issues or global food security (all topics that came up during the discussion), the ultimate source of disagreement is on the fundamental issue of what is the proper relationship between humans and animals.

What was very different for me as a moderator – I’ve dealt with widely-divergent perspectives on a panel more than once – was the nature of the questions asked by the vegans in the audience. The group used an online tool for taking questions from the audience, and the cloak of internet anonymity allowed some of the questioners to be a little more… pointed… in their approach than they might have been had they been asked to give their name and speak from a microphone.

These questions are a highly-sanitized smattering of questions, because the student leaders of the group were actively moderating and deleting questions that were personal attacks toward one of the speakers, and those that got more graphic. Reading some of the questions in real time, on stage, and figuring out how to ask a legitimate question from sentences of invective was challenging, but in some cases it worked quite well. For example, the last question – is “humane meat” a misnomer – is a very thoughtful question if you strip out the editorial about “existential horror of being murdered.”

Even setting aside the especially nasty questions that didn’t survive the moderation process, the questions above are an illustration of why folks in food animal production have a hard time not only understanding and identifying with folks of a radical vegan ideology, but also why it’s nearly impossible for the average farmer to respond to these types of questions without getting emotional in return. 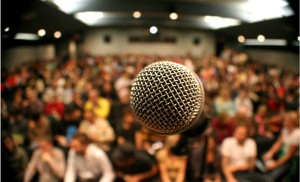 We continue to ask farmers and agribusiness professionals to speak up on behalf of their industry – and I will continue to do so, because the farmer’s voice is an extremely important one in the conversation about food system issues – but we should also acknowledge that it isn’t an easy job, and understand why not every farmer is willing to step into the line of fire.

It’s worth noting that I very much enjoyed the conversation with the vegan panelist, and I respect her choice not to consume animal products. In the same way, I ask others to respect my belief that The Creator provided Humanity with dominion over the animal kingdom, and designed animals for our use as companions, as beasts of burden, and yes, as food.

Here’s the good news for farmers concerned about dealing with the emotion of activism: strict vegetarians and vegans are a relatively small minority in our society. There is a surprising dearth of reputable polling on this, but a 2006 Harris poll pegged it as 2.3% vegetarian and 1.4% vegan, with a 2016 update putting the population at 3.3% vegetarian and 1.7% vegan. So although activists in this space get an outsized share of voice in media coverage and online, their actual purchasing decisions make up a very small percentage of the overall consuming public.

That is not to say that they aren’t influential, of course – as one questioner noted last night, a trip through the grocery store shows that the food system is changing, with labels and product offerings illustrating that manufacturers and retailers listen to these folks and are willing to compete for their business. The advent of lab-grown meat is an externality food animal producers must watch carefully to see if folks who don’t like the idea of consuming animals – but who like the taste of meat and its unique nutrient profile – are willing to switch to plant-based or lab-created faux meats.

In the meanwhile, my suggestion to food animal producers remains the same: YouTube-proof your own farm, and do what you can to be a positive influence for agriculture in your community and within your sphere of influence.