The world is a book, and those who do not travel read only one page.” ~ Saint Augustine

My first trip abroad was more than 20 years ago now; at the tender age of 15, my folks allowed me (with no small amount of concern from my mother, who was convinced something bad was sure to happen) to join the Spirit of America National Honor Band for its 20th Anniversary tour of Europe. Along with other marching musicians from nearly every state in the union, I spent three weeks that summer hopscotching across The Netherlands, Germany, France, Switzerland, Luxembourg, Lichtenstein, Belgium and Austria.

It was an experience that would change my life forever.

I joined the tour again four years later, in the summer of my freshman year at Ohio State, and again, just a few weeks across the pond left an indelible mark on my life, my outlook on the world, and my understanding of who I was as a person. That’s not to say that one doesn’t have life-changing moments in your own back yard, but there is something almost magical about visiting another country, seeing how other cultures live and play, and enjoying the sights, sounds and tastes of somewhere strange and new and exciting.

In the years since those tours, I’ve had occasion to go back to Germany once or twice for work, and have been north of the border to Canada more than a few times in recent years (though in fairness, aside from the French-Canadian parts of Quebec, Canada feels a lot like some of my favorite parts of the U.S.). Last week, I took my first opportunity to travel South of the Equator.

As part of my final residency in the Purdue MS-MBA Program in Food and Agribusiness Management, I joined two dozen members of my graduate cohort in Brazil for eight days exploring the state of São Paulo, the economic engine of the country and an important agricultural region. 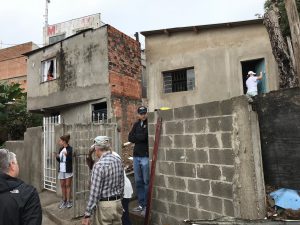 We spent two nights in Piracicaba, a city of nearly 400,000 that is home to the University of São Paulo’s Luiz de Queiroz College of Agriculture (commonly referred to by the Portuguese acronym ESALQ). Our purpose there was a service learning project coordinated by MUCAPP, a local charity founded by an effervescent 70-year-old social worker named Ivani Fava Neves; in the 25 years since its founding, MUCAPP has rebuilt more than 434 homes for the poor of Piracicaba.

While the weather conspired to keep us from actually painting – it rained for the first time in more than 35 days the entire morning we were scheduled to be on site – we did have the opportunity to see the neighborhoods MUCAPP’s volunteers are saving, and it was a humbling experience. Picture 200-300 sq. ft. masonry structures, packed cheek-by-jowl on the side of a steep hilly landscape, many of which are accessible only by alleys barely wide enough for two people to pass one another without touching. Many of these structures were literally falling down around their occupants before MUCAPP’s assistance… it is abject poverty, the likes of which most Americans simply never see, let alone experience.

Following our service-learning experience, we trekked on to Ribeirão Preto, a city of nearly 670,000 situated in the middle of one of the most important agribusiness centers of Brazil. Ribeirão Preto’s major products include oranges and orange juice, beef, dairy products, coffee, sugar, corn and soybeans. The city hosts “Agrishow” annually an event that is considered one of the most important agricultural trade shows in Brazil.

Our group toured a sugar cane research facility, an orange grove and orange juice processing facility, a peanut co-op, a coffee farm and coffee co-op, several sugar cane fields and a major sugar mill and ethanol refinery, and a feedlot that handles more than 50,000 head of cattle annually. We also got to see first-hand a major trucker strike that threatened to cripple the meat and livestock sector, and which led to a governmental state of emergency in the days leading up to our departure. It was a full week, to say the least.

While we were on tour, we had the chance to learn about crops and agricultural products that most Americans consume, but most of us never see in the fields, and also to see how production for crops and cattle we do raise in this part of the world differs in the Southern Hemisphere. We talked with at least one billionaire, dozens of farmers, two multi-generation agribusiness moguls, researchers, professors and Brazilians of every walk of life. It was, as I said before, magical.

But think about what makes it magical… Brazil is an incredible place, and I understand completely why the director of Purdue’s Center for Food and Agribusiness is taking a nine-month sabbatical to live in the country and learn the language. But that really isn’t what made the trip magical, or why I think Saint Augustine hit the nail on the head with the quote I used to open this missive.

The magic of travel comes, I think, from perspective.

I’ve never lived outside of the state of Ohio, and I often wonder if I’ve missed something by not truly getting away. But I think by opening my mind and my heart to international travel, I’ve opened my eyes to how big and how small this world really is, and how wonderfully lucky we are to call it home.