It’s something of a joke in my family, built over the years from one story to another, that I am a master of what we like to call, “The Sternly-Worded Email.”

Originally, The Sternly-Worded Email was something I thought of like a letter to the editor, or a response to a customer service survey. Mom, recounting a recent experience at a chain restaurant that involved lengthy waits, an absentee server and a mold-filled pie case, told me, “I thought about sending them a Sternly-Worded Email.”

I chuckled dutifully, because it was said with love.

But I realized something earlier this week, after firing off one of my trademark emails to a 20-something teaching assistant who committed the grievous sin of saying, in so many words, that I was a crappy writer. My realization? That I do not take criticism well.

There are lots of reasons for this, and I’m sure a therapist would have a lovely time unpacking them, but the long and the short of it in this case is that writing is one of the few things in life that I do well, and as such, I think of myself as a writer. When something becomes part of our identity, we tend to guard it fiercely, because that action – in this case, writing – is not merely a task that we do, but a core part of our very being.

One counselor I read this week put it this way: “Honestly, no one likes being told they are wrong or they should improve. It’s human nature to believe our own experience and judgment. After all, it has gotten us to where we are fairly successfully.”

And that’s the truth of it in my case… being a writer is what has provided me the greatest happiness in life (aside from my relationships, namely with my wife and daughter, that is), it’s why I work where I work, and why I have the non-work pursuits I have (speaking to agricultural groups and writing about Ohio State wrestling). 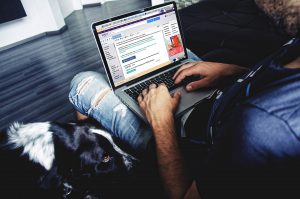 After the adrenaline wore off and I realized the folly of barking at a first-year doctoral student for being bad at delivering constructive feedback, I decided to study up a bit more on how one becomes better at receiving criticism, and how that skill can not only make us stronger, but make us better in the process. One of the most powerful pieces I found came from noted author Gretchen Rubin, who in a happy coincidence came highly recommended to me by one of my closest friends, not a week before and on an unrelated topic… serendipity, I thought.

Rubin offered some practical tips for handling criticism, including things like delaying action – something I rarely do before sending a Sternly-Worded Email – and admitting my mistakes, something I almost never do with regard to my writing. But the most powerful thing Rubin offered was a suggestion to “embrace the fun of failure.”

That one caught me sideways, so I stopped to re-read what she was saying, because trust me, I’ve encountered failure more than once:

Fact is, trying new things and aiming high exposes me to criticism. I remind myself to Enjoy the fun of failure to try to re-frame failure and criticism as part of the fun. Otherwise, my dread of criticism can paralyze me. Once, when I told my husband that I was upset because I’d received a mean comment here on the blog, he said, “Remember, this is what you want. You want to put your ideas out there. Not everyone is going to be nice.” That made me feel better.

Wow, did that hit home. Why do I write? To put my ideas out there. Why was I in position to get some pretty pointed feedback from a would-be professor in the first place? Because I wanted to better myself by earning graduate degrees in economics and finance. In other words, not so someone could tell me how great I am and that I already know it all.

Like Rubin, I am highly competitive and tend to lean toward insecurity about some things, so criticism, especially if it isn’t delivered well, sets me on edge and I do something dumb like fire off a Sternly-Worded Email. But by thinking about this notion of “embracing the fun of failure,” I’m looking at my missteps, and even my detractors, as opportunities to do it better next time.

If nothing else, so I can thumb my nose at the critics when I hit it out of the park the next time I step up to the plate.