Here’s to the crazy ones.

The misfits. The rebels. The troublemakers. The round pegs in the square holes. The ones who see things differently. They’re not fond of rules. And they have no respect for the status quo.

You can quote them, disagree with them, glorify or vilify them. About the only thing you can’t do is ignore them. Because they change things. They push the human race forward.

And while some may see them as the crazy ones, we see genius. Because the people who are crazy enough to think they can change the world, are the ones who do.”

Fellow Apple enthusiasts will recognize that passage, part of the company’s iconic “Think Different” campaign. Versions of the text were used in Apple television advertisements in the late ’90s, and I recall reading it on an in-store poster alongside photos of Einstein, Edison and Earhart.

I’ve always had a soft spot for entrepreneurs. On some level, I suppose I’ve always thought of myself as one such person… I recall as a child plotting the founding and growth of my first company, I gravitated toward the entrepreneurial aspects of the Supervised Agricultural Experience as a teenage FFA Member, and when my first radio station decided it would get out of the agricultural news business, my broadcast partner and I did the only logical thing we could think of, and started an ag news network of our own.

Entrepreneurs are definitely the crazy ones.

Since leaving that radio network in 2010, I’ve spent nearly eight years in one role or another working for Feedstuffs, a publication I often refer to as “The Wall Street Journal of the feed and livestock industry.” As part of the Feedstuffs team, first as a staff editor and later as an account director, I had occasion to meet and observe an entrepreneur name Pearse Lyons, founder of global feed ingredient empire Alltech.

Dr. Lyons passed this week at the age of 73, and his passing had me thinking about entrepreneurs, what makes them tick, and lessons we can learn from this tribe of crazy ones.

Lyons was an Irish entrepreneur with a background in brewing and distilling, a scientist by background but a marketer and dealmaker at heart. In the late 1970s, he immigrated to the States with his wife and young children, with a massive vision for a global business based on his understanding of yeast-fermentation technology and its applications in agriculture.

Like Steve Jobs at Apple, Lyons launched his business in his garage, and a few short decades later, it’s a multi-billion-dollar endeavor operating around the globe. From his company’s announcement of his passing: 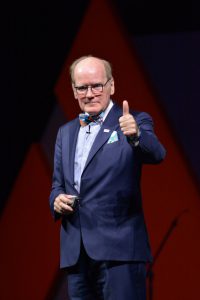 He was widely regarded as an inspirational leader and communicator. He lived with passion and purpose — rising before dawn to begin communicating with colleagues around the world, issuing daily “One Minute Charge” motivational messages and traveling incessantly so he could meet his team members and customers in person.

He built Alltech into the fastest-growing company in the global animal health and nutrition industry through innovative technology and strong branding. Today, Alltech is the only privately held and family-owned business among the top animal health companies in the world.

The company’s reach has also grown far beyond yeast-based additives for animal feed to include award-winning beers and spirits, a crop science business and even promising research into human health challenges, such as diabetes and Alzheimer’s disease.

Lyons was very proud of the company’s privately-owned status and was resolute on keeping it. He was a man who liked to move quickly on opportunities, and he relished the agility and speed that being accountable only to himself afforded him.’

So what does it take to go from an idea to a billion-dollar brand? Certainly it takes hard work, dedication, and a variety of similar attributes one could rattle off without thinking too hard. There are a few things that jumped out to me from that passage, though.

Entrepreneurs see the world differently – they see opportunities where others see obstacles, and businesses where others see booby traps. They are willing to put some skin in the game, push all the chips into the middle of the table, and let the cards fall where they will.

What can you and I learn from these fearless founders of business and industry?