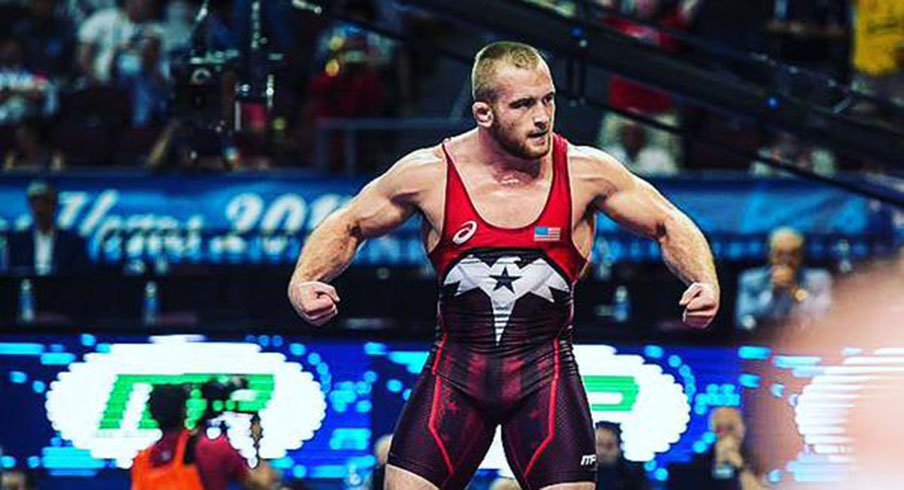 Kyle Snyder is, without a doubt in my mind, the best active wrestler on the planet today, and perhaps the greatest wrestler of all time.

The only reason I hedge a bit on the latter pronouncement is that Snyder is finishing up his senior season at Ohio State, and I’m presuming that he’s going to wrestle for at least another full Olympic cycle – and possibly two – adding to his already impressive tally of three world-level championships, including the 2016 Olympic gold medal.

So let’s put this in perspective a minute. At 22 years of age, a student-athlete in his final season of NCAA competition is the three-time, reigning, defending, undisputed 97 kg champion of the world, and he is nowhere near the end of his career.

Snyder is the defending Olympic, World and NCAA champion in his weight class, and in the latter, he regularly faces competitors outweighing him by 30-65 pounds, as was the case when he defeated Michigan heavyweight Adam Coon, who towered over Snyder when they met in last week’s Big Ten finals.

Here’s the takedown to secure Kyle Snyder’s third Big Ten crown and avenge his only loss in three years. pic.twitter.com/UG0LOKxMyZ

The Maryland native is a three-time Big Ten Champion, a two-time NCAA champion, and when he competes this weekend in Cleveland at his final NCAA tournament, he’ll almost certainly become one of the elite in his sport to finish their career as a four-time All American.

Kyle Snyder is clearly athletically talented and physically gifted. His father was a college football player, and his mother is herself extremely athletic, so, as Buckeye head coach Tom Ryan told reporters this afternoon, Snyder is blessed with good DNA.

He’s also one of the hardest workers on the team, something his coach and teammates mention frequently. Ryan often talks about Snyder’s willingness to continuously put himself in situations of discomfort in the name of getting better at his chosen craft.

“He understands that deep, consistent, relentless suffering is needed to attain what many think is impossible,” Ryan told me in an interview for Eleven Warriors earlier this year. “This guy, day in and day out, understands ‘chosen suffering.’ He puts himself through a lot of discomfort constantly so that when showtime comes, he’s really ready.”

Think about the significance of that statement for a moment… How many human beings would, on a regular basis, “choose suffering” to achieve some measure of greatness at an unspecified point in the future?

Would you? Do you?

Deep, consistent, relentless suffering is needed to attain what many think is impossible.

That is profound. Thankfully, most of us aren’t competing in a field of endeavor where other human beings are trying, with every ounce of their being, to pin our shoulder blades to the floor, or wrench one arm behind our back as far as conceivably possible in an effort to win an athletic contest.

But do we accept the necessary “discomfort” required to become truly great at our chosen profession or vocation, or do we simply accept the easier path of above-average, or the effortless path of mediocrity?

What about in our personal lives? Do we strive to do the difficult things it takes to be a truly great spouse or parent? Or do we do “just enough” to skate by, and hope things work out in the long run?

Those are rhetorical questions, of course. “If it was easy, everyone would do it,” as the saying goes.

Over the six or so months I’ve covered Ohio State’s wrestling team for Eleven Warriors, and in getting to know Kyle Snyder in particular, I’ve had many an occasion to ponder just how unusual the elite college athlete really is, compared to the average person.

Consider Snyder’s teammate, Bo Jordan. Jordan, also a senior at Ohio State aiming to be a four-time All-American wrestler at this week’s NCAA Tournament, is not only a first-rate combatant in his sport, but also a father of two who underwent a round of chemotherapy earlier in the season to reduce the size of a tumor in his foot.

I don’t know about you, but the notion of being a husband, a father, a college student, an elite athlete and going through chemo is just about enough to send me over to curl up in a ball in the corner. And yet, when I talked with Bo earlier this afternoon, he was the most optimistic person in the room about his, and his team’s, chances to win a national title Saturday night in Cleveland.

Bo Jordan, like Kyle Snyder, understands that to be truly great, discomfort and suffering are part of the process.

One of the consistent themes of Kyle Snyder’s career as the world’s best wrestler, and of his teammates pursuit of their third Big Ten title in four years, and perhaps their second national title in the same span of time, is the relentless pursuit of getting better at the sport of wrestling.

“I have high expectations for us,” Snyder said. “I think we have a team that is capable of becoming the best team that has ever competed in the NCAA Tournament. We showed a glimpse of it at B1Gs, but I think we can can do better.”

Snyder’s team won the Big Ten tournament two weekends past with the highest team score achieved by a team since 2002. And Snyder’s response is that he and his teammates can do better.

That’s a lesson worth learning, for all of us.