A while back, a friend asked me to recommend some great podcasts. Since I’m an old broadcaster at heart, he theorized, I’d surely have some solid subscriptions to suggest. Sound theory, but I listen to a surprisingly small number of podcasts. They can be summarized this way: one about wrestling (college and freestyle, not WWE), one about powerlifting, and one called Revisionist History by Malcolm Gladwell.

Gladwell’s is my favorite, because it’s extremely well-produced, Gladwell is one of my favorite authors, and he is a tremendous storyteller – not quite Paul Harvey doing The Rest of the Story, but a bit more engaging than your average NPR fare (and that’s not a veiled dig at NPR, one of our nation’s last bastions of quality journalism).

The usual set up is this: I go outside to mow the lawn, pop in my Powerbeats ear buds, and fire up an episode of Revisionist History. Gladwell calls it his look back at “things forgotten or misunderstood,” and indeed his topics are a bit like the topics I pursue on this blog… a bit all over the place, and connected only inasmuch as they are of interest to the author/host, and people who find things he finds interesting, well, interesting.

A pair of recent episodes has me pondering a question about something we’ve done in business in general, and in the agriculture/food industry in specific: have we taken the consumer too seriously?

In the ninth episode of his second season, Gladwell boldly proclaims that McDonald’s broke his heart, in fact betraying all of us as a society back in 1990, when they committed the grievous and frankly unforgivable sin of taking beef tallow out of the friers, and instead serving us flaccid, flavorless imitations of those iconic french fries cooked with some cocktail of vegetable oils instead of good, old fashioned beef fat.

The episode introduces us to a brash, eccentric force of nature named Phil Sokolof, a self-made multimillionaire who used his personal fortune to bully the most iconic brand in the history of food into removing saturated fats (the aforementioned beef tallow used to fry those magnificent fries) from their menus. Gladwell has a video giving us a good look at the bully in action, circa 1990, and you should watch it before you read on.

Sokolof’s story is pretty straightforward: he was a hard-charging businessman in Omaha who had the world by the tail running a successful company, when he had a massive heart attack at age 43 – far too young, in his mind, for a man of his overall health to nearly buy the proverbial farm. He and his doctors determine that his high cholesterol was to blame, and he set about the Herculean task of improving our collective cholesterol profile by forcing America’s food companies to take saturated fats out of their products. (Side note: his daughter, in an interview with Gladwell, acknowledges that her father’s genetics were at least partially to blame for his high cholesterol.)

In telling us this tale, one that a generation of listeners has likely never heard, Gladwell makes an important point: Why on earth did McDonald’s give three figs what this one malcontent had to say about one of their most-beloved products? One might posit that the company simply tired of the headache. Large multinational corporations are notoriously risk-averse, and indeed by April 1990, when Sokolof took out a nationwide newspaper ad claiming McDonald’s was “poisoning America” with saturated fats, the company’s stock price was down nearly 10 percent from its 12-month high.

McDonald’s, like other food companies Sokolof had targeted with his campaigns, ultimately decided it was less painful to give the bully their milk money than to continue to fight in the court of public opinion. They started cooking french fries in vegetable oils, and the french fries of my youth were gone forever.

Here’s the thing, about Phil Sokolof and his quest… Sokolof was wrong. Because he based his new-found mission on the notion that saturated fats were the nutritional devil, he in essence doomed all of us to a sub-par version of a food product that was truly great. McDonald’s changed the recipe, and embarked on their own quest to recapture the magic under a set of rules they didn’t create. Along the way we all learned about transfats, something far, far worse for us than good ol’ saturated fats.

In the same way, USDA and other well-meaning organizations in health and nutrition followed the clarion call of Ancel Keys, a researcher whose “Seven Countries Study” convinced us that meat, milk and eggs were going to kill us. In the process, they changed our collective diet to one largely based on carbohydrates, trading the risk of heart disease for the certainty of obesity and diabetes… and probably heart disease, too. (Side note: Keys’ Ph.D. wasn’t in nutrition or human physiology or anything like that… it was… wait for it… oceanography and biology.)

We’re just now seeing the wave of recognition that Keys was largely wrong in his conclusions, and that the shift we’ve seen in the American diet over the past half-century was almost summarily deleterious for the average consumer, and for our collective health in general. Journalists such as Gary Taubes and Nina Teicholz are fighting the good fight, attempting to raise the important questions about why we’ve traded fats for carbohydrates, and what we’ve done to ourselves in the process.

Gladwell goes into the many faults with Keys’ seminal study in the tenth episode of the season, and I highly recommend you listen to what he learned about the life expectancy of test subjects fed vegetable oils versus saturated fast (spoiler alert – the people who ate saturated fats lived longer).

Is the Customer Always Right?

With this bit of historical background, let’s go back to the question posed earlier: have we taken the consumer too seriously?

McDonald’s caved when Sokolof made up some nonsense about the company “poisoning America” with hamburgers and beef tallow. Who thought a Big Mac and fries was healthy eating, after all? Kroger, and other leading retailers, took a similar path of least resistance a decade ago when they opted to grease a few squeaky wheels and force dairy farmers to ditch the synthetic version of a naturally-occurring hormone used to boost milk production. Livestock producers have dealt with animal rights activist pressure on a number of housing issues in the poultry and swine sectors, with most retailers and food companies simply acquiescing to demands from well-heeled activist groups such as the Humane Society of the United States.

In each of those cases, the companies utter platitudes about listening to customers, and indeed most agriculture organizations and companies have gone the same route, frequently talking about the need to listen to consumers (this is a topic I tackle frequently as a speaker).

It seems logical to take this approach, because everyone knows that “the customer is always right.” We vote with our dollars, the saying goes, and if companies don’t listen to us as customers, we’ll vote for a company that does. But that raises the question, do customers really change their purchasing habits based on the types of things activists like Sokolof make a big deal about? If McDonald’s had held fast, would consumers have stopped eating those glorious fries and gone to Wendy’s or Burger King instead?

In other words what would happen if, instead of listening to the handful of really noisy “consumers” who carp about things like saturated fats, or gestation stalls, or GMO labeling… the industries and companies that make up food and agriculture bucked up every now and again and said, “Thanks, but no.”

Perhaps our best test case is Domino’s Pizza, a company that famously told HSUS to buzz off in 2012, when the activist group attempted to bully the pizza chain into adopt a pledge to force pork producers to phase out gestation stalls. What happened to Domino’s after it told one of the biggest bullies on the playground to take a hike? In the six years since, the company’s stock price is up 762%. Domino’s resurgence isn’t a product of telling an animal rights group to lump it, of course, but rather that decision was a product of clear-headed leadership that said, in essence, that customers who wanted cheap pizza delivered quickly probably didn’t care much about how the sausage on that pizza was produced back on the farm. 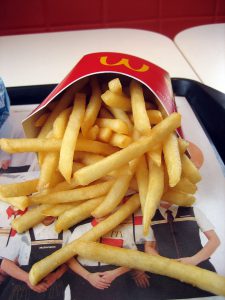 People looking to buy pizza and have it delivered to their home at supper time aren’t thinking about sow housing – they’re concerned about things like taste, cost and convenience, what I think of as the holy trinity of food purchasing. Likewise, I think customers of fast-food hamburger chains don’t really care about saturated fat content – they want to order off the value menu and get piping hot fries that are crispy on the outside, and full of pillowy potato goodness on the inside. Whole Food shoppers might worry about pseudo-scientific mumbo-jumbo… McDonald’s customers, probably not so much.

Domino’s knew what it needed to do to get on top of the pizza game, and it is executing that strategy extremely well. McDonald’s, meanwhile, has struggled with relevance and tried everything imaginable over the past decade to grow its business, from all-day breakfast (smart move) to a variety of “better burger” offerings attempting to put it on par with chains like SmashBurger or Five Guys. Along the way, it’s seemingly forgotten what made it great in the first place: a consistently tasty product, at a reasonable price, served as quickly as possible.

Maybe all the company really needs to do is start frying fries in beef tallow again.