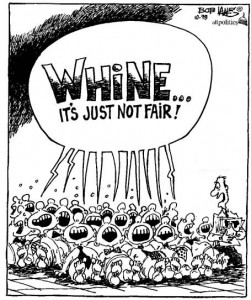 Earlier this morning I read a great piece via the HuffPo (there’s a phrase I never thought I’d write) outlining the reasons Gen Y “Yuppies” are so sad: highly-inflated expectations and the curse of being “special.”

Generation Y is the generation born between the late 1970s and the mid 1990s, so I fit snugly in this generation. The author of the HuffPo piece introduces readers to a lovely stick figure (straw man, anyone?) character named Lucy, who is also part of a yuppie culture that makes up a large portion of Gen Y.

I have a term for yuppies in the Gen Y age group — I call them Gen Y Protagonists & Special Yuppies, or GYPSYs. A GYPSY is a unique brand of yuppie, one who thinks they are the main character of a very special story.

As the piece progresses, we learn that Lucy is unhappy, based on a very simple formula for happiness: Happiness = Reality – Expectations. In other words, if your reality exceeds your expectations, voila, you are happy. If not, well, that’s bad.

Lucy’s Baby Boomer parents were raised by Greatest Generation parents, and their accumulated expectations – based on an obsession with economic security and the mystic “American Dream” – understood that happiness was somewhat a function of stability derived from a practical, secure career that was built over many, many years of hard work and sacrifice.

For Lucy’s generation, however, Baby Boomer parents instilled in their children an unbridled sense of optimism and possibility largely unfettered by the constraints known during the 70 years prior to Lucy’s birth. Gen Y kids like Lucy growing up believing that they are “unique,” “special,” and most importantly, “that they can be whatever they want to be.”

Such a warm and fuzzy upbringing – what I call the “participation ribbon conundrum” – has led to a generation of what the HuffPo blogger describes as wildly ambitions yet delusional group of young adults who want it all and want it all now dammit. They have no concept of “paying their dues” as their parents did, building a career over many, many years, and expect almost instantaneous fulfillment (both materially- and philosophically-speaking) coupled with a heightened expectation of what fulfillment entails in the modern era (the author also points out that this problem is exacerbated with a culture “taunted” by their peers’ successes, on full display via Facebook and Instagram).

And there is a very real reason why the Lucys of the world have such a wildly over-inflated view of themselves: we’ve told them since they day they were born that they were wonderful, different, special and perfect. This generation got participation ribbons for everything they did as a kid, and their parents moved swiftly into a culture where “winning isn’t everything,” and even better, where “we’re all winners.”

We’ve stopped keeping score at kids’ sporting events because we don’t want their feelings to get hurt, and we tell them that they can be anything they want to be when they grow up in the face of all evidence to the contrary. I will forever recall getting a plaque for being the “most supportive player” on my little league baseball team despite the fact that I was squarely in the bottom third of the talent pool on our team.

It’s not that I’m in favor of crushing children’s dreams, of course (I have a 7-month-old daughter, and she has the promise of the whole world of opportunities ahead of her), but I firmly believe that we’ve done a generation a great disservice by leading them to believe that if we just put our minds to it that we are good enough, smart enough, and likable enough to rule the world.

The bottom line is that there is only one LeBron James (or for kids of my era, Michael Jordan – who I can’t stand, really), and we won’t all grow up to be Warren Buffett. Rather, I hope we see the wisdom of helping young people determine what their talents and strengths truly are, rather than indulging them with meaningless platitudes. This generation is unhappy because we’ve treated them like unicorns their entire lives, and then they grow up to realize they’re more like your average quarter horse.

But back to the HuffPo piece for a minute…

How do I know the author is right, even beyond my own gut reaction (Hell yeah!, I said to myself)? Well, the piece pissed off a lot of young yuppies.

When I posted the piece to Facebook with my own commentary, a lively discussion ensued, which included a number of cogent arguments from reasonable and reasoned individuals (those are my people, after all). But then I found this gem, a smoldering rebuke of the original piece entitled, “Fuck You. I’m Gen Y and I Don’t Feel Special or Entitled, Just Poor.” (Pardon the language, but I think sharing the author’s true sentiment is important to the discussion.)

You have no idea about student debt, underemployment, life-long renting. “Stop feeling special” is some shitty advice. I don’t feel special or entitled, just poor. The only thing that makes me special is I have more ballooning debt than you. I’ve tempered the hell out of my expectations of work, and I’ve exceeded those expectations crazily to have one interesting, exciting damned career that’s culminated in some leadership roles for national publications. And I’m still poor and in debt and worked beyond the point where it can be managed with my health and my desire to actually see the son I’m helping to raise.

Prior to reading his post, I had no idea who Adam Weinstein was, but I looked him up. We’re apparently of roughly the same age, give or take a few years, we’re both journalists and bloggers who write about social issues, and we’re both apparently raising a young child. We appear to have several things in common, in other words.

So I guess I’m going to be the a-hole who tells Weinstein that he sounds like a whiney yuppy, and more or less illustrated what the original HuffPo piece was getting at in living color.

I have a kid, lots of medical bills (’cause having babies is expensive), a mortgage, student loans to pay off, etc., etc., etc. Having been through some of his complaints before, I can empathize – money issues and the problems they raise really, really suck. We’re not independently wealthy, and my wife and I both have to work to pay our bills and  work toward the kind of lifestyle we want for the two of us and our Little Princess.

You know what I’m not going to do? Whine about how damn unfair the world is. You know why? Because even looking back on some pretty crappy things that have happened in my personal and professional life, I know I’ve still got it made compared to about 97% of the rest of the planet.

It really chaps liberals and yuppies’ asses to hear this, but the vast majority of us in the U.S. don’t have any real problems. Oh yes, we all have our own problems, but show me your perceived issues, and I’ll show you the poverty rates for the rest of the world. Tell me how bad your student debt is, and then let’s talk about how much money you spent on food last week compared with the total food budget for a family of four in about 87 other countries of the world.

Okay, perhaps I’m being harsh – I don’t want to make light of another man’s problems, but simply replying “fuck you” to an otherwise well-reasoned explanation of my generation’s overly-inflated sense of self-worth and expectations for life in general is not something to be celebrated.

Real life isn’t something that happens to other people…

I’m a big fan of Ohio State head football coach Urban Meyer (yes, I thought he was the devil himself up until about 18 months ago, but that’s a different story), and one of the things he’s preaching to his players this year is the simple philosophy that Event + Response = Outcome. As Forrest Gump taught us, $#!+ happens… that’s the Event. We  can’t control that, but we can control our Response. How we respond, then, largely dictates the outcome of the situation.

Student debt, while a problem our country has to get a handle on, is still a function of choice. I chose to go to college. I furthermore chose to go to Ohio State instead of applying to more expensive private schools. I chose to work part-time jobs (sometimes two or three) to help pay for my expenses, and I also chose to take on some student debt.

Here’s the real crux of the issue, however. If you want to belly-ache about how poor you are, Mr. Gen Y Yuppy, let’s talk about where you spend your money. My grandparents raised five kids on a 120-acre farm, and Grandma didn’t get a job off the farm until the last kid was in high school My folks raised two boys 30 years later on a combined income that was still probably $10k less than what I make in a year as a young writer.

How did they do it? Well, they didn’t pay $80-100 per month for cable television, for starters. They had no internet bill, because Al Gore hadn’t invented it yet, and they sure as hell didn’t have cell phones, let alone one for each member of the family. Take it a step further, and Grandma made her kids clothes, they never went out to eat, and I’ve heard Dad tell stories more than once about how on Saturday night the kids were allowed a Dixie cup of Pepsi and a handful of potato chips. They didn’t have new card, and we ate dinner around the table every night.

We’ve made the choice in our household to accept a certain number of monthly expenses such as cable and internet (I require the latter for my job), and we know that those expenses require certain tradeoffs. My wife is a master of the spreadsheet, and we watch our budget fairly closely so we can do the things we want to do by eschewing the things that aren’t as important.

I’m not saying you have to go Amish (or even Billy Ray Cyrus 1986 mullet-style like this family), but I think you have to acknowledge that it isn’t necessarily that the “system is broken” as many want to believe, but that our expectations have changed, and that reality means that we have to adapt with them.

Like several of my friends on Facebook this morning, I still have high hopes for the “Millennial” generation, because I’ve met some outstanding young people in my travels, including a former intern who really challenged me on my comments about the HuffPo piece. But I still maintain that my peers and the young adults coming out of university today need a heavy dose of reality: even if you’re one in a million like your mother told you, there are still 1,400 just like you in China alone. Oh, and when you play baseball, someone actually loses the game.